Angel Tree is life-changing for prisoners and their families. Chris Cleveland smoked his first joint at age 12, the initial step on a 30-year journey with drugs. He remembers his age because that year his father, a Marine, and his mother, president of the New Mexico Broadcasters' Association, finally divorced. Even before the divorce, his parents worked long hours. "I had the freedom to do whatever I wanted," he recalls, "And it wasn't a good thing."

By 16, his high school asked him to leave.

"My formal education stopped there," laments Chris, but his addictions took off. A self-described "highly functioning addict," he held down a series of jobs while abusing drugs. At home, he got high. On the job, he was by turns a bounty hunter, bail bondsman, and corrections officer.

After Chris's mother died of cancer, he says, "I shook my fist at God." He descended into a four-year cyclone of drugs and arrests, blowing through his sizable inheritance, his salary, and the profits of frequent thefts.

By then Chris was married and had a young son named Christopher. The family moved incessantly, and Chris and his wife had volatile confrontations. To compensate, Chris sometimes gave his son lavish gifts purchased with stolen credit cards.

Though arrested dozens of times, Chris used connections and manipulation to evade prosecution, until his choices caught up with him in 2002. Facing 69 felony charges, he left behind his 8-year-old son and entered the Metropolitan Detention Center in Albuquerque.

“I wasn't really looking for change in my life,” Chris confesses. But when he completed drug rehab and his incarceration dragged on, he realized that he could not manipulate his way out of trouble. The freedom he had so long abused was gone; and he felt oppressed in his spirit.

Then, sensing a strange tug he could only describe as a "call from God," he accepted an unexpected opportunity to fill a vacancy in a faith-based dorm.

"The first time I heard the worship," he remembers of a chapel service, "it was 80 hard-core prisoners. It sounded like angels. My heart just broke at that point."

But after 15 months, Chris—deemed a high-risk inmate—was transferred to the state penitentiary, where he lived in 23-hour lockdown.

A GLIMMER OF HOPE

Alone with a television and a Bible, Chris increasingly missed and worried about his son. At best, they spoke once a year, and mutual pain stilted their interactions. 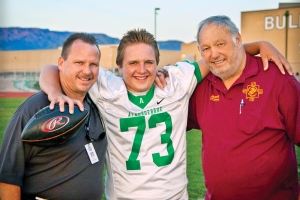 Prison Fellowship's Angel Tree program brought Chris back together with his son.

"He knew his dad to be a real scoundrel," he explains. Though Chris knew God had transformed his heart, he had no opportunity to demonstrate those changes to his son.

But when a Prison Fellowship® volunteer slid an Angel Tree® pamphlet through the slot in Chris's cell door, he registered his son to receive a gift and the Good News of Christ's love—all delivered by Prison Fellowship volunteers and designated "from Dad." Every year, Angel Tree mobilizes churches and organizations to deliver a gift, the Gospel, and a personal message to children on behalf of their incarcerated parents.

Christopher received a basketball and soon shared a phone call with his father.

"All he could talk was about his basketball," remembers Chris, swallowing hard against tears. "All of the things that I gave to him when I was a mess weren't important to him, but the basketball gave him hope."

Angel Tree allowed Chris and Christopher a meaningful point of connection every Christmas. Meanwhile, Chris grew more connected to God, participating faithfully in a Bible study led by Prison Fellowship board member Dave Cauwels. Dave had the honor of baptizing Chris in 2005.

Brought outside for the baptism, Chris was held in a cage. He was brought to the makeshift baptismal font—a laundry cart—shuffling along in shackles, but no fetters could limit his sense of liberty. "It was a lockdown freedom!" he rejoices.

When Chris came out of prison in 2006, his troubled ex-wife made him a surprising offer: full custody of their son. Chris, shown with his son and his father, is becoming the dad God always meant him to be.

Ever since, Chris has thrown himself into the care of Christopher, now a 16-year-old football player, fulfilling a promise that he made in lockdown to "raise my son the way the Lord would have him to go."

To be a good father, Chris knows that he has to stay "clear and clean." He supports his family by running his own business. Outside of the office, he is deeply invested in a local church, receives support from Prison Fellowship mentors, and has completed all of his parole requirements, earning a recommendation for full pardon.

At his office building, Chris co-leads a Bible study for former prisoners with Dave Cauwels, so Dave sees the Clevelands frequently and can encourage the growth of the father-son relationship, which now includes morning prayer and regular devotions.

"Chris is a good father," observes Dave, "and his son is growing in Christ."

Father and son also serve together. Every Christmas since Chris's release, they have volunteered to distribute Angel Tree gifts in their community, giving back to the program that transformed their own relationship.

Chris is vice president at Under His Construction in New Mexico. He is the founder of New Path Ministries of New Mexico's Men's Discipleship Program. He helps former prisoners to build a better life and become leaders in their community.

Chris is also an ordained minister. He serves as a pastor at Under His Construction and New Path Ministries, as a reverend with New Beginning Church of God, and as a volunteer for Prison Fellowship.