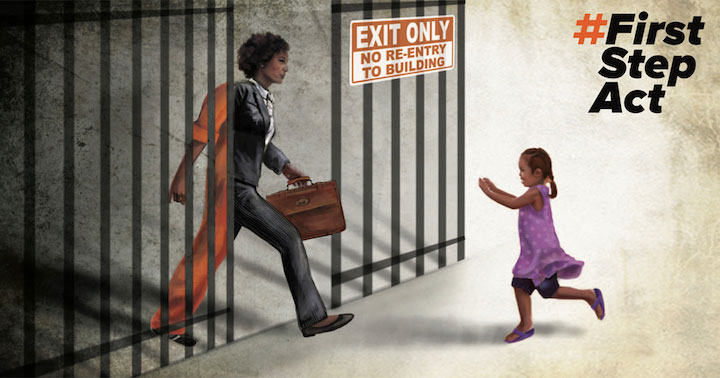 WASHINGTON, DC—Prison Fellowship®, the nation's largest outreach to prisoners, former prisoners, and their families, and a leading advocate for criminal justice reform, is commending members of the U.S. Senate for passing the FIRST STEP Act—federal criminal justice reform legislation that is expected to be passed by the U.S. House of Representatives this week and then signed by President Donald Trump.

'This is about getting smart on crime by giving men and women, made in the image of God, the tools to change their lives.'

"We applaud the Senate for taking a bold step for federal criminal justice reform by passing the FIRST STEP Act," said James Ackerman, President and Chief Executive Officer of Prison Fellowship. "This legislation will help reduce recidivism by preparing men and women to fulfill their God-given potential through restorative programming, including improved substance-abuse treatment programs, life-skills classes, and vocational training—building job readiness to fuel local economies. This is about getting smart on crime by giving men and women, made in the image of God, the tools to change their lives."

'Today, the Senate refused to double down on the failed policies of the past. The FIRST STEP Act's passage reflects America's growing demand for smarter and more restorative solutions to crime.'

"Ninety-five percent of those who are incarcerated today will eventually be released back into our neighborhoods—failing to prepare people returning from prison endangers communities and wastes human potential," said Craig DeRoche, Senior Vice President of Advocacy and Public Policy. "Today, the Senate refused to double down on the failed policies of the past. The FIRST STEP Act's passage reflects America's growing demand for smarter and more restorative solutions to crime."

The FIRST STEP Act improves programming in federal prisons. It better prepares men and women to become productive citizens through individualized risk assessments and by expanding access to recidivism-reducing programs for all federal prisoners. The sentencing reforms added to the legislation would make minor adjustments to correct disproportional sentencing enhancements and increase judicial discretion in certain federal drug offense cases.

Prison Fellowship, headquartered outside Washington, D.C., is a leading advocate for criminal justice reform. Prison Fellowship was founded in 1976 by Chuck Colson, the former aide to President Richard Nixon who served time in a federal prison camp for a crime related to the Watergate scandal. Colson's post-prison life proved that people who are now behind bars can and should be prepared for productive, meaningful futures. In more than 40 years of service, Prison Fellowship has learned what works—and what doesn't—to transform lives and reduce crime.

WHAT:           Media Conference call on the Senate's passage of the FIRST STEP Act

Craig DeRoche, Senior Vice President of Advocacy and Public Policy. DeRoche leads the organization's efforts to advance restorative criminal justice reform at the state and federal levels. A recognized subject-matter expert, he has testified before Congress and confers with lawmakers to help them design legislation that prioritizes accountability, community participation, and second chances.

Heather Rice-Minus, Vice President of Government Affairs. Rice-Minus directs federal lobbying, grassroots engagement, and advances Prison Fellowship's efforts to educate Christians on pivotal criminal justice issues. She also spearheads its efforts to build coalitions with advocacy groups, think tanks, faith-based organizations, and other key stakeholders in Washington, D.C. For over five years, she has been working on the federal criminal justice legislation that has now taken shape as the FIRST STEP Act.

Quovadis Marshall, formerly incarcerated in an Iowa State Prison and now the lead pastor of Hope City Church in Iowa. Marshall and his family came to Washington, D.C., in July 2018 to lobby in favor of the FIRST STEP Act.  Accompanied by Prison Fellowship staff, Marshall, his wife, and two children visited their senators to share his story and how programming, including the Prison Fellowship Academy, was instrumental in his transformation. Marshall met personally with Chairman Grassley, who expressed his firm conviction that sentencing reform should be added to the FIRST STEP Act.