The questions on camp intake forms are usually standard. What grade is the child going into? Is she allergic to bee stings? Is this his first time away from home?

But not at My Camp. Camp director Suzanna Jacobson asks about the tough stuff: economic hardship, divorce, abuse. The 11 questions on the My Camp intake form cover "ACEs"—adverse childhood experiences. And at a camp that serves only kids whose lives have been touched by incarceration, addiction, or both, high ACE scores are common.

Gleaning this information is central to the mission of My Camp, a trauma-informed Angel Tree camp in southern Indiana. Knowing what campers are facing before they set foot in camp helps Suzanna anticipate what they will need—and what will help facilitate their healing.

In the original ACE study, conducted from 1995 to 1997 with 17,000 individuals, researchers at Kaiser Permanente sought to understand the impact of traumatic childhood experiences. The results were startling. Researchers learned that the breadth of such experiences—including childhood abuse, neglect, and household challenges—is strongly correlated with multiple risk factors for several of the leading causes of death in adults, including alcoholism, cancer, heart disease, and suicide.

This study sparked a profusion of related research, and the benefit of understanding childhood trauma came into sharp focus.

For five years, Don Caballero, a Prison Fellowship Academy® program manager, served as a program director and a master trainer at ACE Overcomers, which is dedicated to breaking the generational cycle of child abuse, neglect, and household dysfunction.

"We need to learn to change the question from 'what's wrong with that person?' to 'what happened?'" Don explains.

'We need to learn to change the question from 'what's wrong with that person?' to 'what happened?'

This kind of curious empathy characterizes the heart of My Camp. Since its inception in 2018, every detail has been tailored to meet the needs of children experiencing trauma.

"It takes four to six [ACEs] to put a child in the danger zone, as far as creating dangerous attitudes or behaviors," Suzanna says. "The average ACE score for our campers is usually around seven, eight. I've had some kids who get every single block checked off."

Suzanna doesn't just gather this information on camp registration forms—she takes the time to talk to the parent or guardian of each camper. She asks about incarceration, parental contact, and whether the child has been in the foster system. Sometimes caregivers ask Suzanna questions, too.

"There was a grandmother, and it was her first time getting in contact with us," Suzanna remembers. "I was explaining the program. They live in the west end of Louisville, and her response was, 'So you're telling me you're going to give my babies a week where they're not going to be worried about getting shot?'"

Suzanna maintains a high ratio of counselors to campers: about 2 to 1. When a child has a hard day, Suzanna wants to make sure personal attention is readily available. In addition, the tempo of My Camp's daily schedule has been thoughtfully planned.

"While some camps may be more like Sesame Street, we're Mister Rogers' [Neighborhood]," she says. "It's a little bit slower. A little bit smaller. We try to go at a calmer pace. So we have the traditional swimming and archery and crafts. But we definitely want to make sure that they have room to talk about things that are sad, or process emotions they don't [usually] have permission to." 'So you're telling me you're going to give my babies a week where they're not going to be worried about getting shot?'

Talking about sad things doesn't come naturally to Savannah, a 10th grader who has been attending My Camp since it began. But she says that Suzanna is helping her.

"I've struggled with bottling up my emotions and stuff like that, but I'm getting better at it," Savannah says. "That's how Suzanna and me are alike. We're happy-go-lucky and hide things that aren't going perfect, but it's OK—because we've learned to get them out."

Savannah finds that talking and journaling both help. She also loves the Memorial Wall ceremony, which happens the Friday morning before the end of camp. Suzanna talks about grief, whether from parental incarceration, broken promises, or isolation. And then she invites campers to take a rock and lay it down beside a wall, symbolizing what they are leaving behind.

"It's really beautiful watching them grieve for the first time and having the chance to say what they need to say and really let go of it," Suzanna says.

Throughout the week, campers and leaders-in-training have a chance to share their stories, an act that can be intimidating but healing at the same time. Suzanna recalls a girl who had witnessed the murder of a family member; sharing that painful memory helped the teenager feel a greater sense of power over the situation.

"I think that healing begins when a person can tell their story," Don says. 'Healing begins when a person can tell their story.'

My Camp isn't just about sharing pain—it's about celebration. Suzanna says they try to pack in as many positive experiences as possible. Among those are birthday parties for every camper in attendance.

"In the past three years, we've had 41 first-time birthday parties," she says—meaning it was the very first time the camper was celebrated with cake, balloons, and presents. Camp staff is careful to choose gifts that parents struggling with addiction are unlikely to return to a store or sell.

"Having some kind of celebration that lets them know you're valued, you're loved, you're cared for—all of those experiences can make a difference," says Don.

Another night, there is a football-themed party for the boys. And the camp also throws a special princess party for the girls, complete with prom dresses and crowns. My Camp brings in local hairdressers to do hair, makeup, and nails. It's a night of feeling special and loved—as well as a segue to talking about Jesus.

THE LOVE THAT GOES HOME

Suzanna says she's careful about the way she shares the Gospel because many of the kids have had negative experiences with church. She says that before camp staff communicates the Gospel, they want to be the Gospel.

At the princess party, she tells the girls, "As much love as you feel right now, [Jesus] is where you can get the most of it."

She explains that the love they experience at camp doesn't have to end. It can go home with them in the form of a relationship with Christ.

"I've lost track of the salvations over the years," Suzanna says. Not only does she see campers make decisions to follow Jesus—she sees lasting change. Before the camp staff communicates the Gospel, they want to be the Gospel.

T.J. had been kicked out of every youth group that tried to help to him. In his quest for seeming tough, cool, and independent, he alienated those around him—until My Camp. Suzanna tapped him as a potential leader, and over time, T.J. began to soften. After several summers, he told Suzanna at the week's end, "I've made the choice. I'm going to give up my thug life."

Now, two years later, T.J. is 16 and holding down his first job. He has a steady girlfriend and is getting good grades. He's even taking classes at the local community college to achieve his dream of becoming a firefighter officer.

"It's just really amazing to see where he was three or four years ago, compared to where he is now," Suzanna says.

But the changes aren't always dramatic. Sometimes it's just a kid who, at lunch on Monday, asks if there will be another meal that day. After being promised snacks and dinner and dessert, his shoulders soften; he won't have to hoard food this week.

Or it’s the 15-year-old who comes in bent on looking "hard," scowling in his intake photo to prove the point. But by Wednesday, he is grinning like a little kid as he eats a cupcake.

The week is made up of moments like this, when kids battered by trauma get to let down their guard and be loved. They are more than their long lists of ACEs and their sometimes-difficult behavior.

"It's about recognizing that these are really, really good kids," Suzanna says. "They're just hurt kids."

Thanks to God's work through My Camp, they are also overcoming trauma and healing. 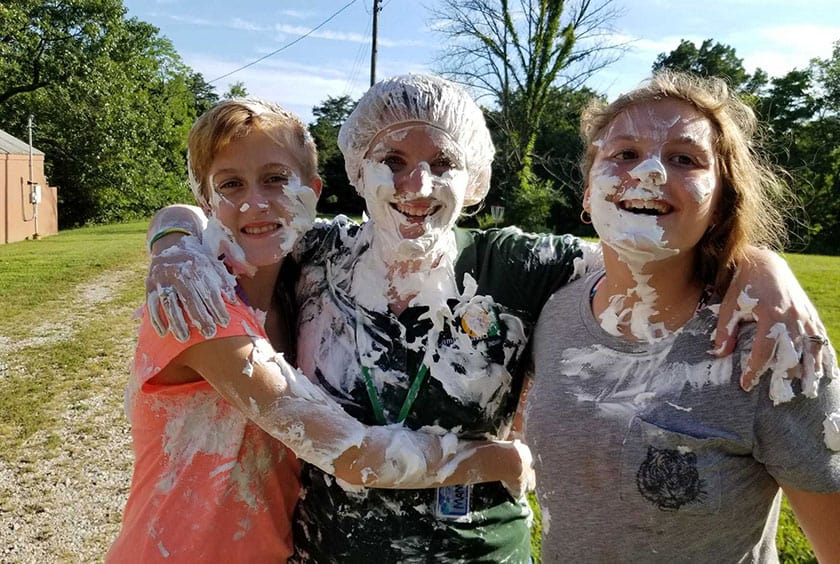 They are more than their long lists of ACEs ... 'It's about recognizing that these are really, really good kids. They're just hurt kids.'

Joanna Breault is a senior writer and editor at Prison Fellowship. She is based in Virginia. Read More Stories by Joanna Breault