“The only thing I’d ever graduated from was drug treatment. I had no training, no certifications in anything. What I did have was a very lengthy criminal history,” says Jessica Towers.

With six felonies and a scant professional résumé, Jessica wasn’t exactly set up for success as a jobseeker. She never finished high school, managed to earn her GED in prison, and could only find a part-time position at a bagel shop. On top of needing to make a living in the expensive Washington, D.C., area, she faced a host of community service hours.

“I had all these obstacles,” says Jessica, an outgoing brunette in her mid-30s. “With nothing sort of tangible to back that [résumé] up, it was really difficult. The prospect of ever leaving that part-time job at the bagel shop looked kind of grim.”

Jessica’s parole officer sent her to log some service hours at DC Central Kitchen. DCCK is a nonprofit—not a soup kitchen—striving to create opportunities for people in Washington, D.C., to work hard and make their lives better. There, Jessica met people who had backgrounds similar to her own, but were heading toward better futures. She realized DCCK could be the missing ingredient in her recipe for successful reentry.

Jessica is not alone. Many people with a criminal record face the “second prison,” a set of legal restrictions, cultural stigmas, and other barriers that block them from finding a job. Without a real second chance, these men and women are unable to support their families and reintegrate into society.

A Recipe for Second Chances

To break down those barriers, DC Central Kitchen offers a Culinary Job Training program. Enlisting people with a history of homelessness, addictions, and incarceration, the program equips men and women to be well-rounded citizens who bring valuable skills into the labor market. After being told he wouldn’t make it in the food industry, Louis Casey graduated the program as the most improved student, and hopes to launch a food truck business soon.

Participants spend 14 weeks learning to thrive in an environment of high expectations and equally great rewards. It’s a spacious, well-lit kitchen, wall-to-wall in stainless steel appliances and a variety of cooking tools. It looks the kind of place where any great chef might get a start. Chief operating officer Andy Finke says participants aren’t expected to be the next Anthony Bourdain, but they are expected to grow.

Men and women engage in personal and professional growth, in what Finke describes as an “intensive culinary and exploratory program.” He explains, “It’s very easy to have a program where you learn a trade; but that’s less than half of the equation.” To that end, DCCK has developed a thorough, holistic curriculum for trainees. Mornings are dedicated to self-empowerment sessions involving honest self-reflection and group therapy. Afternoons entail the actual culinary instruction—measurements, terminology, techniques—and it is not easy.

“That’s where the grit comes in, the stick-to-it-iveness,” Finke continues. “It’s not all roses, but it will eventually come to good.”

Participants spend the last two weeks of the program fully concentrated on a job search, and that perseverance pays off. Just last year, the Culinary Job Training program boasted a 90 percent job placement rate upon graduation. Of those graduates, 86 percent had retained their jobs after six months.

For Jessica, that job search was a turning point. She worked with her job coordinator and set out to find her niche in the culinary industry. She tried a few different jobs, but as weeks turned into months, she felt the tug to return to DCCK.  It took a few interviews, but eventually, Jessica got the call she had been waiting for.

“They said they could use my help, and at that point, it was a no brainer,” says Jessica. She began at the front desk. Six months later, she was promoted to HR administrative assistant. She is now the volunteer program coordinator, sitting in her very own office. “Somebody saw something in me that I didn’t see in myself,” she adds.

Someone saw something in Louis Casey, too, when he entered the program about four years ago. “I wasn’t really serious for a while because I didn’t think it was for me,” he says. He was ready to quit just a few weeks in, but a friend convinced him to stay. Eventually, there was no turning back.

“The man who first interviewed me told me halfway through the program that I wouldn’t make it in the industry,” says Louis. “He didn’t think I had the drive, or the know-how, to do it. That kind of messed with me. It stuck with me. But it made me stick to the program.” He added with a laugh, “In a way, I thank him.”

On graduation day, Louis received Most Improved Student, as well as a job offer from the kitchen director. Louis began in a maintenance position, and over time, he earned some promotions. Soon enough, he shifted to a supervisory role in the kitchen.

A new attitude was Louis’s secret ingredient. Like the meals in those ovens, he had experienced complete transformation. Now he dreams of opening his own food truck business.

“I’m living a nice life right now, but you always want to enhance your abilities and move forward,” says Louis. He looks sharp in his kitchen uniform, but he may not be wearing it for much longer. He has been discussing his plans with potential business partners, and he hopes to have something off the ground in the next two years.

Jessica isn’t done moving forward, either. She won a scholarship through DCCK to work on her certificate in human resources management, which she plans to complete in the next year. Another goal is to obtain her Certified Volunteer Administrator (CVA) credential. As volunteer program coordinator, she has already gained some experience in that area. 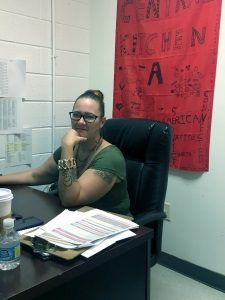 Jessica Towers won a scholarship to work on her certificate in human resources management, which she plans to complete in the coming year.

“A lot of times I’ll get to talking with students when they come in, or court-ordered volunteers,” says Jessica. “Sometimes when I share parts of my story with them, they look at me like, ‘Really? You don’t look like somebody who’s got a history.’ It’s always really cool when people make that connection. … It’s always funny how surprised people are.”

Today, Jessica is a registered voter, receives no outside assistance, and lives in her own place with her name on the lease. When asked about how different life is now, her face lights up. “It’s a complete 180,” she says.

In light of stories like these, Prison Fellowship works to support second chances for those locked up in the “second prison.” The Second Prison Project, a campaign of Prison Fellowship, seeks to change perceptions of those with a criminal record. No one should live in the shadow of their past mistakes when they have already paid their debt behind bars. When people are sincerely ready to lead a new life, they should be afforded the dignity to do so. Given a new start, they can experience real restoration and start giving back to their communities.

Andy Finke, who knows the remarkable stories of Jessica, Louis, and so many others, wholeheartedly agrees. “There are numerous reasons why folks got in trouble but that’s not really the story. The story is afterwards, how they’ve grown, how they’ve changed, and how they’ve changed their community and those around them. That’s the real story.”